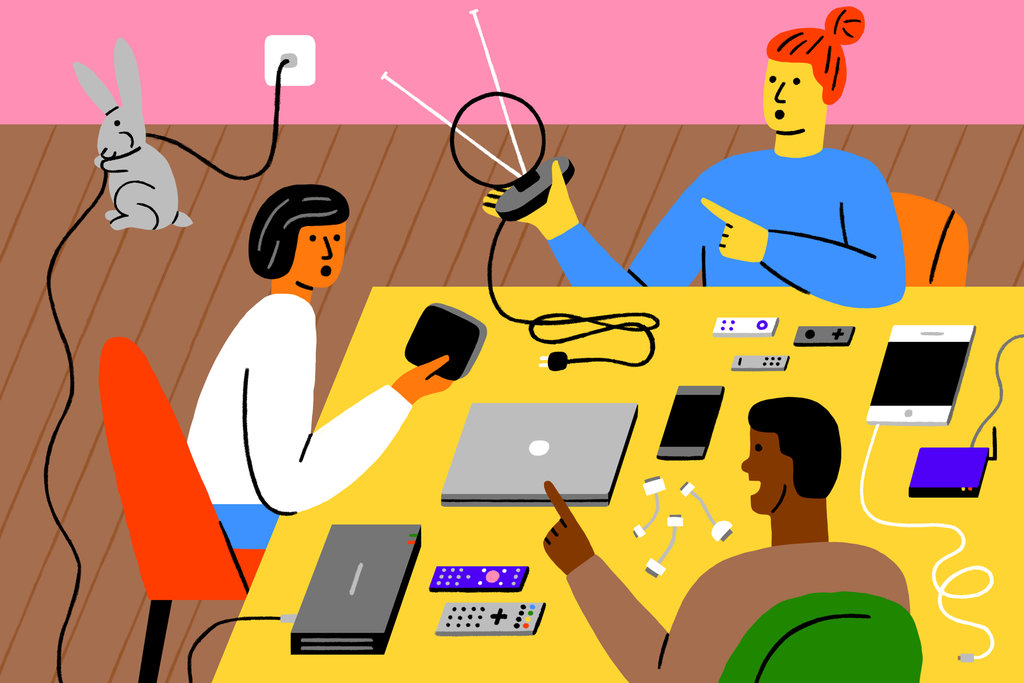 How to Cut the (Cable) Cord

There are many ways to watch online content on your tv. Your television itself might have apps, or you might have a Blu-ray player or game system connected with built-in streaming services. If neither case applies, or if your TV, Blu-ray player, or game system doesn’t have the exact media features you want, you can get a dedicated media streaming hub. Most media streamers allow you to set up your TV with any online or local media streaming services you need for well under $100. Among the media streamers currently available, five platforms stand out: Amazon Fire TV, Android TV, Apple TV, Google Cast, and Roku. All of these platforms except Google Cast have on-screen menu systems and dedicated remotes so you can view whatever you want from the couch, without a mobile device to control everything. Google Cast is a bit different, as it relies on a PC, smartphone, or tablet, with Cast-compatible apps to stream content. No matter which you choose, they each give you access to many of the most popular music and video streaming services available. Resolution is another big factor to consider. All of the platforms mentioned have options for ultra high-definition (4K) and HDR content. In the list above you’ll find the top-rated media streamers we’ve tested. Below is a closer looking at the top media streaming platforms.

Amazon’s Fire TV platform is built around FireOS, a modified version of Android designed with Amazon’s content in mind. Fire TV devices are focused heavily on Amazon Prime media, with Amazon Instant Video and Amazon Prime Music built prominently into the menu system. There are plenty of other content services available through Fire TV as individual apps, like Hulu, Netflix, and YouTube, but the big advantage of Fire TV is having all of your Prime content right at your fingertips. Amazon has equipped its Fire TV platform with Alexa, the same voice assistant used in the company’s Echo speakers. It’s a useful tool to use with the voice remote included with the current Fire TV Sticks. If you want hands-free Alexa with your Fire TV, the newer Fire TV Cube features a far-field microphone array that can pick up your commands just like an Echo, without needing to use the remote. The Fire TV Stick 4K recently replaced the Fire TV as the “standard” Fire TV device. It’s a budget-friendly $50 stick that supports 4K media streaming with both HDR10 and Dolby Vision. If you haven’t made the jump to 4K yet, you can save a few bucks with the basic $40 Fire TV Stick, which is now the only non-4K Fire TV streamer. You can also find Amazon Fire TV Edition TVs, which are sets that function just as if they had a Fire TV attached to them. The Toshiba Fire TV Edition is one of the latest models we’ve tested. If you still want to watch broadcast television even after you cut the cord, and enjoy a local DVR instead of relying on a streaming live TV service, Amazon’s Fire TV Recast has you covered. It’s a Fire TV-powered OTA tuner with a DVR, letting you watch local programming and record it at your leisure, and stream both live TV and DVR recordings to any Fire TV device in your home or any mobile device over the internet. It isn’t a replacement for a Fire TV; it has no on-screen interface or remote on its own. You connect it to your home network and access it through a Fire TV to manage recordings and watch live cable. Fire TV also supports most streaming live TV services as well, including Stremenify Access.

Google Cast is the least visually obtrusive and physically complicated media streaming platform; you take a Chromecast or Chromecast Audio, plug it into a power source, plug it into your TV or sound system, and control everything through your mobile device. There are no remotes, no on-screen interfaces, and no app stores to separately navigate. You just connect your Chromecast to your home network and stream whatever you’re watching (from a Google Cast-compatible app, of which there are many) on your smartphone or tablet. It’s easy to use and economical since both the Chromecast and audio-only Chromecast Audio are among the least expensive media streamers on this list at $35 each. And both they and the 4K-capable Chromecast Ultra with Google Assistant in Google Home speakers, so you can issue voice commands for what you want to watch, and even see supplemental information related to voice searches (such as your Google Calendar).

Roku calls the services and apps available on its devices Channels, and currently offers thousands of choices in the Roku Channel Store. All of the big streaming media names are available, including Amazon Instant Video, Hulu Plus, Netflix, Sling TV, and Twitch, along with many smaller, niche apps and services for movies, sports, weather, news, and international content. Roku’s current lineup is its largest, with a total of six models across a wide range of prices and features. The Roku Streaming Stick+ and Ultra stand out as our top choices, both offering 4K video with HDR10 support. The Ultra is more expensive and larger than the Streaming Stick+, but it offers benefits like wired connection options and a remote with a headphone jack. For a less expensive alternative, the Roku Premiere and Premiere+ are 4K-capable streamers available for $40 and $50, with the Wal-Mart exclusive Premiere+ featuring a voice remote and the standard Premiere relying on an infrared remote with no microphone. The Roku Express and Express+ are viable streamers for anyone who hasn’t yet upgraded to 4K, with the Express+ providing legacy SD video support through composite video. Roku has also pushed into the television market with its Roku TV platform. The company doesn’t make TVs itself, but it offers its technology to manufacturers to incorporate into their screens. This has allowed many more budget-priced televisions to include connected features they couldn’t use a few years ago, while keeping prices low. Roku TVs (like the TCL 55R617) work just like Roku media streamers, only they’re built directly into the sets themselves. Now the majority of Roku TVs natively support 4K as well.

Android TV is Google’s dedicated Android-based media streamer menu system, different from the heavily modified version of Android used in Amazon’s Fire TV products. The Android TV-powered Nvidia Shield TV was the first platform to offer Netflix 4K content outside of a TV with the Netflix 4K app built in, and it remains a powerful system. It also features Google Assistant, putting it on the same footing as the Fire TV with Alexa and the Apple TV with Siri. Android TV devices are also all Google Cast compatible, so you can use your smartphone or tablet to stream content to it just as if you had a Chromecast. Google hasn’t made a first-party Android TV media streamer yet, instead focusing on Chromecast devices and leaving Android TV to other companies. Nvidia and Sony have both come through on this with the Shield TV and Sony’s smart TVs. Thanks to far-field microphones, some Android TV devices like the Shield TV controller and the Sony Master Series Z9F TVeven offer hands-free Google Assistant, letting you control them entirely with your voice without picking up a remote.

Apple has been slow to update its Apple TV media streamer, but it’s finally caught up with the Apple TV 4K. The latest Apple TV supports 4K video with both HDR10 and Dolby Vision, and features the Apple TV app store which the company only added to the device two years ago. The app selection is still a bit light compared with Roku, and tends to eschew certain on-demand and subscription services that compete with Apple (like Spotify, against Apple Music), but other than that the Apple TV is feature-rich and very capable. A voice remote lets you use Siri with the Apple TV 4K, and even control smart home devices if they’re HomeKit-enabled. The only drawback is its hefty price; at $180, the Apple TV 4K is well over twice as expensive as the Amazon Fire TV, Google Chromecast Ultra, and the Roku Streaming Stick+. Any of the devices here are a great choice for bringing online content to your TV. For even more options, check out our media streamer product guide.
Tags: 30k 4k Awwards live tv streaming

Far far away, behind the word moun tains, far from the countries Vokalia and Consonantia, there live the blind texts. Separated they live in Bookmarksgrove right at the coast of